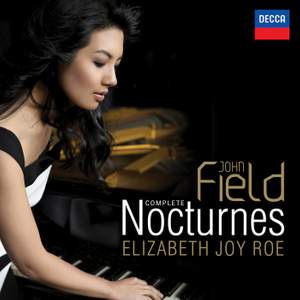 Roe’s playing is tender and graceful, with a delicate, songful touch, and she balances the various elements judiciously and always with attention to detail — BBC Music Magazine, September 2016, 3 out of 5 stars More…

John Field has been called the ‘Father of the Nocturne’, creating the form which Chopin perfected, but thus relegated to a footnote in musical history. In fact he was held in high regard by his contemporaries: a student of Clementi, he knew Haydn, Hummel, Czerny and Mendelssohn, was championed by Liszt and an acknowledged influence on Chopin, Brahms and Schumann.

Field led an extraordinary life: Dublin-born he travelled throughout Europe in the early 19th century, lived in St Petersburg and Moscow, fathered an illegitimate child and led an extravagant lifestyle, more or less drinking himself to early death in Moscow in 1837.

Roe’s playing is tender and graceful, with a delicate, songful touch, and she balances the various elements judiciously and always with attention to detail

Roe is anxious at every turn to make poetry from this music, and she has a suitably haloed sound. Everything is very thoughtful, and she can be delicate, too, in response to Field’s filigree flights of fancy