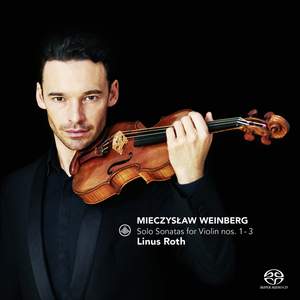 Linus Roth’s disc of Weinberg’s three Sonatas for solo violin is the fourth recording he has devoted to the Polish-born composer’s violin music, following Challenge Classics CDs of his Violin and Piano Sonatas, Violin Concerto and Violin Concertino - two of which were Gramophone Editor’s Choices.

Since he won the Echo Klassik Award for his EMI debut album in 2006, Linus Roth has made a name for himself both as one of the most interesting violinists of his generation and as a champion of wrongly forgotten works and composers. One such is Mieczyslaw Weinberg, a friend of Shostakovich (whose music also appears here with a transcription of his Three Fantastic Dances). Roth is perhaps the leading performer of Weinberg’s music currently; and his interest in the composer led in 2015 to the formation of the International Mieczyslaw Weinberg Society.

Weinberg’s three unaccompanied violin sonatas are passionate works dating from 1964, 1967 and 1978. The Third Sonata, Op.123, is the most challenging and important: one continuous movement lasting nearly half an hour, with many technical difficulties. This sonata is dedicated to the memory of his father Shmuil Weinberg, who was a composer and conductor at the Yiddish theatre in Kishinev. Given that Weinberg knew his father had been murdered in the Holocaust, the sonata isn’t easy listening but it’s hugely rewarding.

Listen to the sonatas individually...and one appreciates not only the plate-spinning skill with which Weinberg keeps different strands of music airborne, suggesting much more than one actually hears, but also the poise and intensity of Roth’s performance.