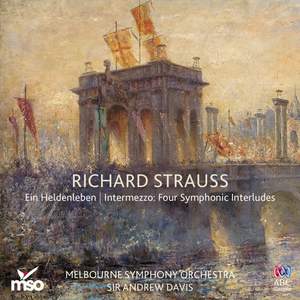 [Davis] knows exactly how to shape towards the big climax, Melbourne trumpets making an especially strong contribution both here and later as the war-mongering chief critic of the symphonic poem…with... — BBC Music Magazine, September 2016, More…

II. Träumerei am Kamin (Dreaming by the Fireside)

III. Am Spieltisch (At the Card Table)

The inspiration for Ein Heldenleben (A Hero's Life) - completed at the turn of the twentieth century - was one of the most groundbreaking works ever written: Beethoven's Eroica Symphony. Largely agreed to be autobiographical - despite Strauss' protestations to the contrary - it depicts various aspects of what Strauss called an 'ideal of great and manly heroism'. Musically, it was the most ambitious work Strauss had written to date, and features a large orchestra and virtuosic violin solo, played here by the MSO's concertmaster Dale Barltrop.

On this album, Ein Heldenleben is prefaced by the Four Symphonic Interludes from Intermezzo, Strauss' opera based around incidents in the life of himself and his wife.

[Davis] knows exactly how to shape towards the big climax, Melbourne trumpets making an especially strong contribution both here and later as the war-mongering chief critic of the symphonic poem…with some beguiling principal wind contributions, above all from the first oboist, the relatively few chamber-musical moments of Heldenleben sound very lovely, and the big moments have impressive lower-brass weight

Davis brings the easy confidence and command of an instinctive Straussian to both works on the programme…the pacing throughout is immaculate, climaxes are gauged with skill, and there’s a real sense of the orchestra giving of their best for both the conductor and this taxing repertoire