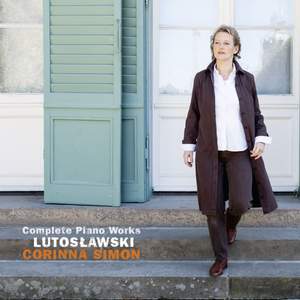 Corinna Simon: Witold Lutosławski was one of the greatest composers of the 20th century. His well-known Variations on a Theme by Paganini for two pianos are in the repertoire of almost every respectable piano duo. Unfortunately, apart from the short piece An Overheard Tune, featured here, Lutosławski left no other work for two pianists to posterity. During the Second World War, Lutosławski played many of his own compositions in cafés, in duo with Andrzej Panufnik, in order to make a living. In July 1944 he had to flee from Warsaw, his home town, just a few days before the Uprising, and was only able to save a small number of his scores from extinction. He didn’t return to Warsaw until April of the following year. Among all the solo piano works Lutosławski must have composed up to the end of World War II, only the Sonata (1934) and the Two Etudes (1940/41) are still preserved today. Lutosławski was an excellent pianist, but after the war he only wrote a very small number of pieces for the instrument. They all pertain to his early post-war period, before he turned to twelve-tone pitch organisation and aleatory technique. What most impresses and thrills me in Lutosławski’s piano output is his immense degree of creativity while heeding every detail with painstaking attention; his wonderful way of associating traditional forms with innovative, bold sonorities and structures, while managing to preserve a great degree of independence that makes this music sound effortless and lively.