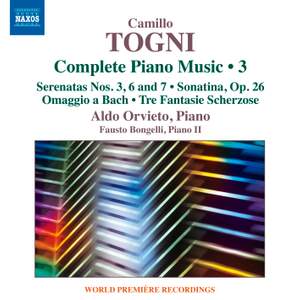 A pupil of the legendary pianist Arturo Benedetti Michelangeli and composition student of Alfredo Casella, Camillo Togni became one of Italy’s most progressive and multi-faceted composers in the latter half of the 20th century. While the Serenate represent an anti-romantic move away from chromaticism towards serialism, the Tre fantasie scherzose, with their glimpses of Liszt, Scriabin and Rachmaninov, recall the nineteenth-century custom of paraphrases based on well-known themes. Using a theme from The Art of Fugue, the Omaggio a Bach was described by the composer as a “fantasia, both serious and ‘commemorative’ in character, which cites and develops Bach’s material in several contrapuntal episodes.”