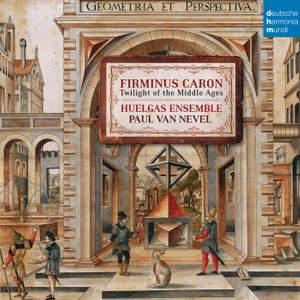 As ever with the Huelgas Ensemble, the unique warm sound, characterised by soft, dark vowels, creates a pleasing sense of unity across the whole album and delivers a smooth and intimate listening... — Gramophone Magazine, July 2016 More…

“There are two things on which listeners can invariably rely with Paul Van Nevel: whatever he unearths, it is without exception wonderful music; and what he offers with his Huelgas Ensemble is always on the very highest level” (BR Klassik). For more than forty years the Huelgas Ensemble has been one of the world’s finest vocal ensembles.

Paul Van Nevel’s original and well researched programmes revolve in particular around the fascinating polyphonic tradition of the Middle Ages and the Renaissance.

The life of the Franco-Flemish polyphonist Firminus Caron is shrouded in mystery, and we know little about him except that he was probably born in Amiens in around 1440. And yet his works were already famous during his own lifetime and have survived in some of the most important music manuscripts of the second half of the 15th century, including a number of the Vatican’s principal choirbooks. The Huelgas Ensemble compares and contrasts five movements from the composer’s four-part cantus firmus Masses with four secular chansons and in that way provides an impressive demonstration of his exceptional individuality, to say nothing of the imagination and variety that make Caron one of the most exciting composers of the late Middle Ages.

As ever with the Huelgas Ensemble, the unique warm sound, characterised by soft, dark vowels, creates a pleasing sense of unity across the whole album and delivers a smooth and intimate listening experience…yet this smooth tone is far from monotonous. Van Nevel frequently draws on groups of solo voices to highlight differences in texture