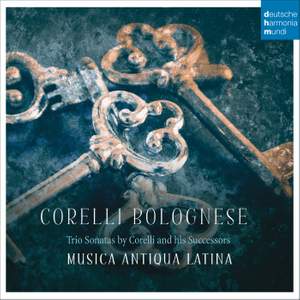 Trio Sonatas by Corelli and his Successors

Bassani, G B: Sonata a tre in Re maggiore

Torelli: Sonata in re

anon.: Sonata a tre in do

This album presents an overview of late 17th century instrumental music in Bologna, in both da chiesa and de camera styles, composed by contemporaries of Arcangelo Corelli. The evolution from Maurizio Cazzati's Ciaccona, provides an excellent example of the extensive mutual influence of the Bolognese masters.

MUSICA ANTIQUA LATINA, based in Rome, is devoted to the rebirth of the early Italian Baroque repertoire, performing on original instruments at period pitch.

Sources and manuscripts from major Italian archives are closely examined, decoding hidden rhetorical figures, symbols and patterns, tracing the blend between sacred orthodoxy and theatrical lyricism. Following the initial scholarly groundwork, Musica Antiqua Latina prepares each work by delving into its unique life and background, searching for the mysterious bonds between performer and creator that transcend age, style and language.