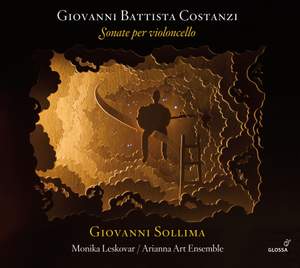 Master of the Choir at St Peter’s, Rome in the 18th Century, little of Constanzi’s work is recorded. The stylish performances accompanied by excellent programme notes make this a worthwhile recording. — BBC Music Magazine, October 2016, 4 out of 5 stars More…

The inspired decision by cellist and composer Giovanni Sollima to investigate the instrumental music of his 18th-century counterpart, Giovanni Battista Costanzi, is yielding its first recording with a new Glossa release of cello sonatas. Costanzi’s place in the history of the cello has all but slipped from view and yet his solo cello sonatas display a remarkable freshness in handling the late Baroque sonata genre as instigated by Arcangelo Corelli. They also impose substantial technical demands upon the soloist – including playing in the instrument’s highest register – making powerful use of the cello’s expressive capabilities. Five sonatas scored for cello and continuo have been selected by Giovanni Sollima for this recording, the first to assess this aspect of the Roman composer’s output. Not content with attending to Costanzi’s works Giovanni Sollima composes one of his own – Il mandataro – which reflects the labours of an apparently marginal member of the Roman court in the time of Costanzi’s patron, Cardinal Ottoboni: a courier or messenger charged with keeping the musicians informed of their duties. Sollima, who has previously recorded Neapolitan cello concertos for Glossa (backed by Antonio Florio and I Turchini), is joined for this new recording by fellow cellist Monika Leskovar (a pair of the sonatas are for two cellos) and the Arianna Art Ensemble. Scholar Imma Battista supplies pertinent biographical information for this overlooked Baroque composer.

Master of the Choir at St Peter’s, Rome in the 18th Century, little of Constanzi’s work is recorded. The stylish performances accompanied by excellent programme notes make this a worthwhile recording.

Constanzi clearly wasn’t known as ‘John of the Cello’ for nothing, because the stylistic and virtuosic variety is extraordinary to the point of feeling experimental…the tone produced by Sollima on his 18th-century Venetian instrument has a slightly ‘dirty’ quality, heavy on energetic panache, which perhaps won’t appeal to everyone but is certainly dispatched with wizardly skill