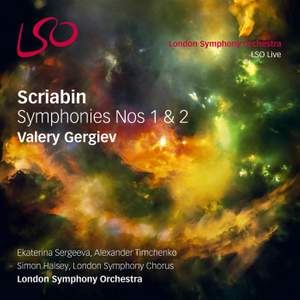 there’s a great sense of freedom in this music that Gergiev manages to create ... Gergiev’s volatility really works in this Scriabin. — CD Review, 9th July 2016 More…

Valery Gergiev and the London Symphony Orchestra bring to a close their revelatory Scriabin cycle with the release of Symphonies 1 & 2.

Epic in scope, Scriabin’s highly original First Symphony was composed at the turn of the twentieth century. The ambitious work consists of six movements, the last of which features a chorus and two vocal soloists, beautifully sung in this recording by Ekaterina Sergeeva, Alexander Timchenko and the London Symphony Chorus. In the monumental choral finale, which brings the symphony to a rousing conclusion, Scriabin uses a text of his own composition to praise the supreme power of art: ‘Come, all peoples of the world, Let us sing the praises of Art! Glory to Art, Glory forever!’

Premiered two years after Symphony No 1, the Second Symphony contains echoes of Strauss, Tchaikovsky and Wagner, alongside Scriabin’s deeply personal sound. While relatively more restrained in style than the composer's other symphonic output, over the course of its five movements there are sweeping climaxes, swirling colours and passages of majestic intensity, with a brooding Andante opening continuing without pause into a fervent second movement.

A mezzo-soprano born in St Petersburg, Ekaterina Sergeeva has been a soloist with the Mariinsky Academy of Young Singers since 2005, after graduating from the St Petersburg Conservatory. In 2009 Ekaterina sang the part of Elektra’s Trainbearer, which she recorded with Valery Gergiev and the London Symphony Orchestra for LSO Live. Her accolades include prizes at both the 2008 International Zara Dolukhanova Amber Nightingale Competition and 2006 International Lisitsian Competition, as well as a Diploma for best performance of a contemporary work from the 2006 International Rimsky-Korsakov Competition.

Tenor Alexander Timchenko was born in Leningrad and graduated from the Glinka Choral School of the St Petersburg State Academic Capella in 1993, continuing his studies at the St Petersburg Conservatory. He performed the role of Shepherd in Stravinsky Oedipus rex with Valery Gergiev and the LSO in 2012, and has also featured on recordings including Stravinsky Les Noces with the Mariinsky Orchestra & Chorus, conducted by Valery Gergiev, 2010

there’s a great sense of freedom in this music that Gergiev manages to create ... Gergiev’s volatility really works in this Scriabin.

[Gergiev has] the measure of the music’s fluidity and its surges of passion and hedonistic repose…and the London Symphony Chorus in excellent form for the crowning paean to art. The Second Symphony benefits from some enchanted solo playing…and altogether finds Gergiev and the LSO exploring the music’s sinew and its emotional flux