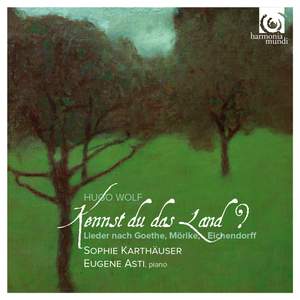 Karthauser…is sensitive to Wolf’s sour-sweet, ever-shifting harmonies, and the raw nerves of the melodic line as it responds to the verse. And she is warmly supported by every nuance of accompaniment... — BBC Music Magazine, September 2016, 3 out of 5 stars More…

The brief period between 1888 and 1897, between the great cycles devoted to single poets and the songs on sonnets of Michelangelo, saw Wolf at the zenith of his creativity. That period saw the genesis of the songs later published in anthologies after Mörike, Eichendorff and Goethe. Although even the early songs before 1888 reveal no arbitrariness in the choice of texts, it is this concentration on individual literary figures that characterises the highpoint of Wolf’s output. Their names resound in the ears of all who love German Romantic literature and are familiar with its transposition into the world of the lied. While Schubert often mined an unexpected vein of poetry in lesser authors, his distant successor Hugo Wolf drank at the source of these giants. Wolf was undoubtedly a virtuoso in the art of making audible the huge dimension of what remains unsaid, though implied. Perhaps he had only one true peer: his former Viennese fellow student Gustav Mahler.

Belgian soprano Sophie Karthäuser studied with Noelle Barker at the Guildhall School of Music and Drama in London. She is now in great demand, especially as a Mozart singer. She sang her first Pamina (Die Zauberflöte) under René Jacobs and her first Susanna (Le nozze di Figaro) under William Christie. Since winning the Audience Prize at the Wigmore Hall Song Contest she has developed an acclaimed career as a recitalist, enjoying a particularly close artistic partnership with the distinguished American pianist Eugene Asti.

Karthauser…is sensitive to Wolf’s sour-sweet, ever-shifting harmonies, and the raw nerves of the melodic line as it responds to the verse. And she is warmly supported by every nuance of accompaniment delineated in Eugene Asti’s piano playing … This anthology of uneasy springs, lovers’ twilights, innocence threatened and experience mourned would make a good introduction for a newcomer to Hugo Wolf.

It’s so lovely to hear the piano sound given the prominence that it deserves, and there’s a lovely bloom on the recording that gives it an almost live quality which I really appreciated. It’s a great selection of songs … it just works really well.

Karthäuser here proves herself a natural in Lieder...With her fresh, limpid soprano and sharp feeling for character and nuance, she gives unfailing delight in the these settings...[Asti] is a model partner, commentator and animator.

[Karthäuser] has developed into a tremendously accomplished artist. Wolf’s songs are not the easiest to get under the skin of, but her readings are utterly convincing … I could name every track as a model of insightful Wolf singing … It should be heard by every Lieder enthusiast.

This selection of settings...is well chosen and cannily arranged. It includes the wryly witty, the tragic and the crudely euphemistic, and Karthäuser’s voice is bright-toned yet weighty enough to carry darker emotions.