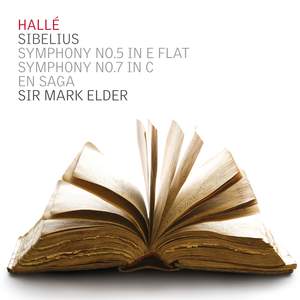 Elder and Halle return to Sibelius with a stunning album of orchestral masterworks in exhilarating live symphonic performances.

Following their recent chart topping release of Vaughan Williams (Sea Symphony CDHLL7542), Elder and his acclaimed forces present a volume featuring major works from one of the great symphonists and orchestrators.

Latest release in warmly received Sibelius series: “Sir Mark Elder is an inspirational conductor and there aren’t too many of those around today. Playing with dramatic bite the Hallé is certainly on its finest form with this all-Sibelius disc. Excellent sound quality adds to the desirability of this release.” Music Web review of previous Sibelius release (Pohjola’s Daughter, Oceanides, Symphony No.2) CDHLL7516 which was Sunday Times Album of the Week, BBC Music Magazine Orchestral Choice, Classic FM Album of the Week and was included in the Sunday Times 100 Best Records of the Year (2013).

Sibelius’ 5th Symphony is one of the orchestral masterpieces, fully displaying the composer’s skill, with evocative and dramatic writing which fully utilizes the orchestral palette.

The 7th Symphony was radical in its seamless one movement structure. Written in the early 1920’s, when Sibelius was tormented with uncertainty and depression, the work was his last in the form and is considered by many as being his finest symphonic achievement.

Inspired by Finnish folk legends, against a history of Russian dominance, En Saga is Sibelius’s first important score to reveal a distinctively Finnish character and was the work with which the national music of Finland became an artistic entity.

Mark Elder presides over a strikingly lissom and cogent account of the mighty Fifth. Not only do the Hallé respond with commendable poise, commitment and personality, Elder paces proceedings judiciously, his comparatively fleet-of-foot conception evincing a keen thrust and sparky intellect…[as for the Seventh], I appreciate its thoughtful sensitivity, seamlessly judged transitions and abundance of scrupulously observant detail.

The conductor brings a bracing ear to the sounds of nature that famously inspired the composer...The Hallé’s playing is now superior technically for its long-standing music director than it was for his great predecessor, John Barbirolli, and Elder is no less impressive a Sibelian.

there is something rather cool, not to say downright chilly, about Elder’s approach to [No. 5], as though the atmosphere of the genuinely austere and implacable Seventh had permeated this work, too...Elder’s careful performance [of En Saga], the hushed final pages perfectly realised, is quite special in its own right.