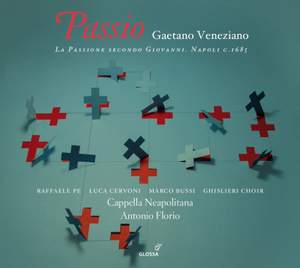 For Glossa’s new 'Passio' release Antonio Florio has discovered and prepared a performing edition of the 1685 St John Passion setting by the Neapolitan composer Gaetano Veneziano: a contemporary of Scarlatti, favoured pupil of Francesco Provenzale and maestro in the royal chapel. It features countertenor Raffaele Pe in the technically demanding role of the Evangelist. Until recently, Italian Passiontide settings from the Baroque era have amounted to only that by Alessandro Scarlatti, but this score by Veneziano has been found in the Archivio dell’Oratorio dei Girolamini in Naples. It displays a surprising blending of modernity and an older style in its instrumental accompaniment, here provided by Florio’s Cappella Neapolitana, formerly known as I Turchini. Moreover, it provides an extrovert and atmospheric response to the Gospel text for the roles of Christ, (Luca Cervoni) and Pilate (Marco Bussi) as well as for the interventions of the crowd (the Ghislieri Choir). Florio has already recorded Veneziano's oratorio, 'La Santissima Trinità', and other sacred music for Glossa. Originally called Cappella della Pietà dei Turchini, the ensemble was founded by Antonio Florio in 1987 after a 10-year period of study and experimentation, It has since become internationally appreciated and a byword in the rediscovery of Neapolitan music written between the 15th-19th centuries, thanks to rare concert programmes, opera productions, and over 40 recordings. Today, almost 30 years after its creation – that group of 'bold pioneers' takes on the name of Cappella Neapolitana Antonio Florio, with the same musicians and collaborators that have contributed to develop this musical project from the beginning.

Raffaele Pe…carries the drama well right from the evocative opening narration … the Ghislieri Choir makes the most of its few interjections… Cappella Neapolitana and conductor Antonio Florio inject as much colour behind the text as they can.

[Cappella Neapolitana] give [Veneziano] a convincing and extrovert reading, with plenty of adroit and appropriate colourful touches and attention to detail; in many ways these instrumental performers are the heroes of the hour…this is a moving and persuasive performance of a genuine masterpiece brought back to life