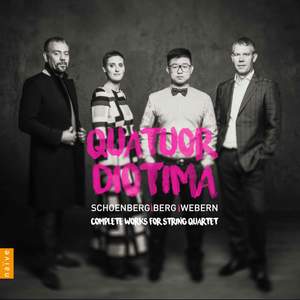 Quatuor Diotima celebrates its 20th anniversary in 2016. This boxset dedicated to the Second Viennese School is the first of two events planned to mark this special year - along with the release of a new series of contemporary composer portraits.

This Schoenberg | Berg | Webern set gathers the complete works for string quartet composed by those three iconic composers. This is a major achievement and the result of years of concerts and research by the quartet, which is now considered to be a leading performer in this repertoire.

As well as the two recording projects mentioned above, the upcoming years will be rich in engagements for the quartet, including the cycle of Beethoven-Schoenberg-Boulez works at Wien Modern, concerts in various countries premiering Enno Poppe’s new string quartet (Wittener Tage für neue Musik, Huddersfield Contemporary Music Festival, November Music‘s-Hertogenbosch, Transit Festival Leuven, Festival d´Automne à Paris), the complete Bartók string quartets in one evening at the Théâtre des Bouffes du Nord in Paris and four international tours, across South America, Japan, the United States of America, as well as the ensemble’s first tour to Russia.

The extreme refinement and minutely focused intensity, in recordings to match, make the Webern a singularly beautiful, if somewhat unsettling experience.

Quatuor Diotima couldn’t play an affected, emotionally over-ripened note if they tried. Their vision of Second Viennese School aesthetics views the backdrop of Romanticism – Brahms, Wagner, Mahler et al – as a starting-shot rather than a point of reference to be dwelt over too obsessively.