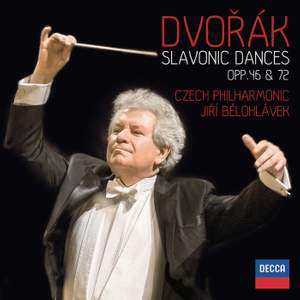 Bělohlávek is especially effective in the Brahmsian contours of the second and eighth of the Op 72 dances...As to Op 46, Bělohlávek offers weighty, purposeful accounts of the faster dances and... — Gramophone Magazine, December 2016 More…

No.2 in E Minor (Allegretto scherzando)

No.3 in A Flat Major (Poco allegro)

No.5 in A Major (Allegro vivace)

No.6 in D Major (Allegretto scherzando)

No.7 in C Minor (Allegro assai)

“[Belohlavek’s] return to the Czech Philharmonic Orchestra as music director has brought him back to his emotional and musical heartland. In works by Dvořák and Smetana, unbounded lyricism and Czech melancholy emerged with the authenticity that only this orchestra can bring.” The Guardian

Maestro Belohlavek and the Czech Philharmonic Orchestra return to Decca with the unforgettable Slavonic Dances from one of the most melodious, harmonious and evocative late 19th Century composers - Dvorak.

Decca’s acclaimed 2014 Complete Dvorak Concertos and Symphonies release was named as one of the Top Recordings of 2014 by the New York Times: “…the set as a whole stands as eloquent testimony to this eminent orchestra’s triumphant return to international prominence...” James R. Oestreich, New York Times.

Performed and recorded by musicians who have an innate understanding and deep-rooted love for this music of their homeland, this is a first-rate recording, bringing great passion and lyricism to Dvorak’s spellbinding Slavonic Dances.

In two sets, the Op.46 Slavonic Dances were such a success on release (in the late 1800’s) that Dvorak’s publisher immediately commissioned a further set (to become the Op.72) – which inspired an equally enthusiastic reception

Lively and colourful, both sets feature a variety of traditional forms of dance; Dvorak expertly working with the leaping gallop, polka odzemek and skocna, contrasted alongside luscious mazurkas and sousedsky.

Bělohlávek is especially effective in the Brahmsian contours of the second and eighth of the Op 72 dances...As to Op 46, Bělohlávek offers weighty, purposeful accounts of the faster dances and brings a discernible pastoral element to the slower ones.

The lilting affection for this glorious music is unsurprising from these Czech artists — it’s in their blood.