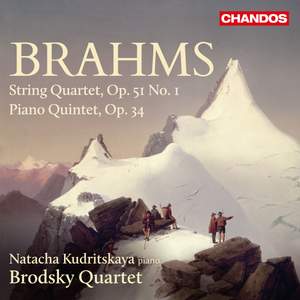 It’s 0 to 100 in three seconds: from the first notes and initial crescendo of the Brahms Op. 51 No. 1, the Brodsky Quartet means serious business. All of this long-established ensemble’s considerable... — BBC Music Magazine, June 2016, More…

The Brodsky Quartet presents this second volume in its exploration of Brahms’s complete string quartets. The first, which also featured the Clarinet Quintet with Michael Collins, received numerous enthusiastic reviews, The Guardian praising the players for their ‘immaculate’ performance. The String Quartet, Op. 51 No. 1, featured here, was written alongside its contrasting companion, Op. 51 No. 2. Both were finally published in 1873 after having been held back for years by a typically self-doubting Brahms, until he had brought them to his own high standards of perfection. Op. 51 may be regarded as evidence of his concern to revive and reinvigorate a genre, the strong legacy of which went back to the generation of Mozart, Haydn, and, above all, Beethoven. The Quartet is joined by the young, prodigious Ukrainian pianist Natacha Kudritskaya in the Piano Quintet, a more adventurous work: it had started life as a String Quintet, which Brahms then transcribed as a sonata for two pianos. The final version gives as much importance to the strings as to the piano.

It’s 0 to 100 in three seconds: from the first notes and initial crescendo of the Brahms Op. 51 No. 1, the Brodsky Quartet means serious business. All of this long-established ensemble’s considerable prowess is brought to bear on the composer’s turbulent chamber music: an enormous and remarkable intensity suffuses the atmosphere throughout. The result is inspiring, profoundly unsettling and a true visceral thrill

These are performances that are not afraid to relax, which don’t insist on maintaining constant tension to keep the pieces taut and together…the playing in the Quintet is similar and matched well by that of Natacha Kudritskaya, who plays very much as part of the team…it’s an approach that makes a fascinating contrast to more conventionally forceful and richly drawn accounts

The Brodskys hold clarity and passion in fine balance in the C minor quartet, while in the thrilling F minor quintet, the Ukrainian pianist adds an effective bite to the often clamorous texture from the off

they excel in a wide range of repertoire, and this performance of the Brahms Piano Quintet...with the Ukrainian pianist Natacha Kudritskaya, is big-boned, impassioned and, especially in the Andante, warm and lyrical.