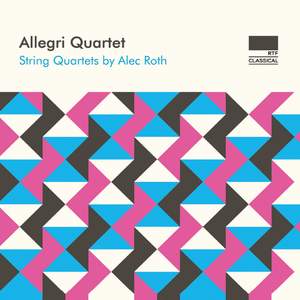 Roth, A: String Quartet No. 3 ‘Autumnal’

Roth, A: String Quartet No. 4 ‘On Malvern Hills’

"The three quartets on this recording were composed for, and premiered by the Allegri String Quartet between 2010 and 2013. I first heard the group ‘live’ on the 6th of May 2009, in an all-Haydn concert given in the lovely surroundings of St Brandon’s Church, Brancepeth, the musical experience enhanced by the view through the clear glass windows of the trees dancing along in the late evening sunlight. The programme included Haydn’s quartet opus 71 No.2. In its first movement Allegro the instruments enter in quick succession around the circle, initiated by the cello’s bold two-note motif. This is such a striking idea. What would happen if the cello were to send round a whole barrage of such motifs. Here, thanks to Papa Haydn, I was gifted the idea for what became the fourth movement of my Quartet No.2." Alec Roth

Roth’s largely happy, inclusive music is characterised by jaunty ostinatos, playful syncopations, memorable melody and friendly tonal harmony, as well as slow movements that are reflective, not angst-driven. No wonder he cites Haydn’s influence in these three recent works.