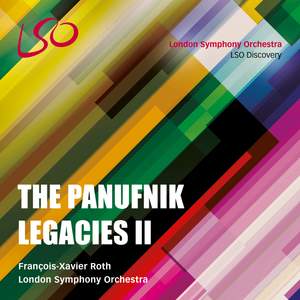 There are some more unusual choices and I think that’s what makes this disc really fascinating. (Francois Xavier-Roth) is someone who is trying to shake things up and I think a major force is... — CD Review More…

III. Harmony in the Mist

Ogonek: As Though Birds

LSO Live present an album of new works by emerging composers, all of whom have been members of the Panufnik Composers Scheme. Devised by the LSO in association with Lady Panufnik in memory of her late husband, the composer Sir Andrzej Panufnik, the Scheme began in 2005 and each year offers six composers the opportunity to write a three minute piece for the LSO. The pieces featured on this release were recorded by the Orchestra at LSO St Luke’s under the baton of François-Xavier Roth, a conductor renowned for his interpretations of contemporary music.

Following on from The Panufnik Legacies, a release which presented works by composers from across the first five years of the Scheme, this recording showcases the works of selected composers from across the first ten years of the Scheme alongside Panufnik Variations, a project that brings together Colin Matthews and Panufnik Scheme graduates. Taking a theme from Sir Andrzej Panufnik’s Universal Prayer as a starting-point, the work features a series of variations showcasing the sounds and styles of Panufnik Scheme alumni Max de Wardener, Evis Sammoutis, Christopher Mayo, Toby Young, Elizabeth Winters, Larry Goves, Raymond Yiu, Anjula Semmens and Edmund Finnis, bookended by an opening and conclusion by Colin Matthews.

Colin Matthews says of the Panufnik project, ‘A real relationship develops, which continues beyond the scheme itself, so that we feel that a ‘Panufnik family’ has been established…. What is remarkable to me is the unity that has emerged from this project : a tribute both to the inspiration provided by Andrzej Panufnik, and to the faith that the LSO has shown in the Panufnik Scheme.’

The Panufnik Scheme is generously supported by The Boltini Trust & The Helen Hamlyn Trust.

There are some more unusual choices and I think that’s what makes this disc really fascinating. (Francois Xavier-Roth) is someone who is trying to shake things up and I think a major force is emerging there. I love hearing these Panufnik Legacies

‘This stimulating release is every bit as impressive as its predecessor. What’s more, it is superbly played and recorded, clear, faithful and dynamic, with stunning impact when required… Each composer here represented is imaginative and confident.