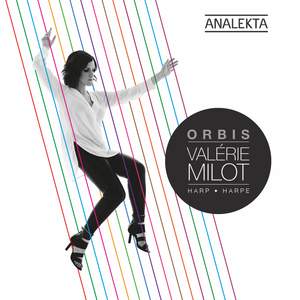 Valérie Milot is both a rebel and a traditional artist of the harp. After beginning her musical training on the piano, she switched to the harp at the age of ten. Fascinated by this imposing instrument, she trained at the Conservatoire de musique et d’art dramatique du Québec in Montréal and Trois-Rivières. In 2008, Valérie Milot completed her studies with high distinction and she won the Prix d’Europe. She is the first harpist in almost a hundred years to have done this. She further developed her music skills in New York with Rita Costanzi.

The title of Valérie Milot’s seventh CD is both a nod to the circle of valued musical colleagues she has worked with over the years and a reference to the loop as a musical concept, a seemingly simple melodic or rhythmical motif that serves as both framework and source of inspiration.

The disc features six complementary approaches, from John Cage’s ethereal In a Landscape to Frank Zappa’s turbulent G-Spot Tornado , not to mention the premiere of Antoine Bareil’s Castille 1382 , written especially for Milot. The recording also marks her 30th birthday, which she celebrates here with some long-standing musical partners and dear friends.