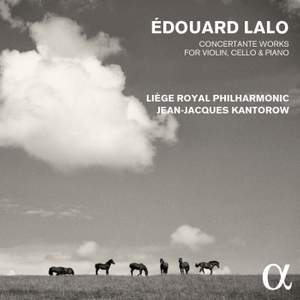 Édouard Lalo made his mark on French music with his opera Le Roi d’Ys, but his instrumental output also has considerable historical importance, with its resolutely innovative aims for its time. More specifically, his concertante music rewards the attentive ear with a brilliant, skilfully constructed style, studded with fresh rhythmic and harmonic inventions that renew the melodic and orchestral language of the genre. Under the direction of Jean-Jacques Kantorow, himself a violinist and extremely familiar with this repertory, the Liège Royal Philharmonic places itself at the service of the virtuoso fingers of six young soloists from the Queen Elisabeth Music Chapel: this anthology provides an opportunity, notably, to renew acquaintance with the violinist Lorenzo Gatto – who recently released a recording of the Beethoven Concerto – in the famous Symphonie espagnole for violin and orchestra. Works such as the powerful Cello Concerto, the elegant Piano Concerto, the folk-influenced Concerto russe and Fantaisie norvégienne, and the sparkling Introduction et Scherzo on themes from Namouna complete this set, which highlights both the work of the prestigious and internationally renowned Belgian nursery for young talent, recently renovated, and a repertory championed by the Palazzetto Bru Zane, which contributed to the realisation of the project.