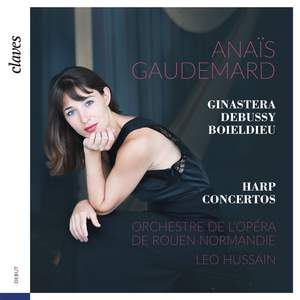 Between Alberto Ginastera’s Opus 25, François-Adrien Boieldieu’s Harp Concerto in C Major, and Claude Debussy’s Danses sacrée et profane, harpist Anaïs Gaudemard made an exacting choice for her first recording with orchestra. These essential works of the harp repertoire, with very different styles – three periods, orchestra numbers to be adapted in each case, three styles of writing and playing – make this an eclectic CD. “I opted for a highly varied programme for harp, aimed at the general public who could thus discover the instrument”, says Anaïs Gaudemard. At the same time, as these works are rarely recorded, they are also of interest for connoisseurs. This CD is an invitation to discovery.