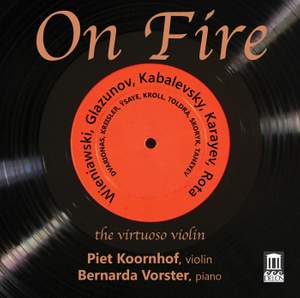 On Fire: The Virtuoso Violin

Wieniawski: Polonaise brillante No. 2 in A Major, Op. 21 (version for violin and piano)

Skoryk: The High Pass: Melody (version for violin and piano)

Featuring works by lesser known composers such as Henryk Wieniawski, Alexander Glazunov, and Fritz Kreisler alongside powerhouses like Dmitri Kabalevsky, the aim of this disc is to bring new light to pieces that may be unfamiliar to most.; Piet Koornhoof is the virtuoso violinist on this recording. Originally from South Africa, he has traveled across Europe, North America, Asia, and Australia performing with astounding dexterity and artistic interpretation.; Bernarda Vorster, also from South Africa, studied piano with Adolph Hallis, Walter Panhofer, and Joseph Stanford. She regularly performs with ensembles in South Africa as well as in Switzerland and Italy.