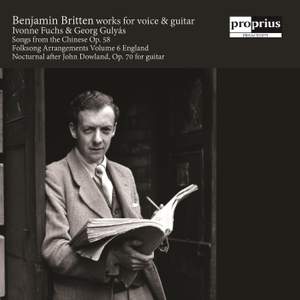 Britten: Songs from the Chinese, Op. 58

No. 4. The Soldier and the Sailor

No. 6. The Shooting of his Dear

After George Gulyás's recent records, including the critically acclaimed 'Complete Lute Works for guitar' on Proprius / Naxos, here is a new CD entirely dedicated to music by Benjamin Britten. It contains all the works in which the guitar is included, and performed together with the mezzo-soprano Ivonne Fuchs.

The album also presents a solo piece, the Nocturnal op.70, one of the guitar literature's most important works. The piece reflects the various stages of insomnia, where the ambiguous theme of John Dowland, Come heavy sleep, hints at how sleep, or death, finally enters as a liberator.

In Songs from the Chinese op.58, we meet a British brooding over the aging process and where we are thrown from melancholy to the restlessness that turns up in Dance song, a wild dance where the unicorn symbolizes lost innocence, one of Britten's favorite themes.

Folksong Arrangements treats traditional themes such as the sailor, love, and moral themes, as in The Shooting of his Dear, where a young man shoots his sweetheart by accident during the hunt after mistaking her for a swan.