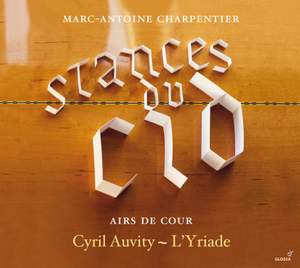 17th century France had an extraordinary enthusiasm for the air de cour: a secular song genre popular across the social spectrum and singable, it seems, by everyone from cobblers to marquises...

Even still, one distinctive voice which proved to be ideal for such airs was the haute-contre, a high tenor, sweet-sounding and clear; precisely the instrument possessed by Cyril Auvity, and it is no coincidence that the singer has, in recent years, been enjoying much success with his performances of the music of, among many others, Lully and Charpentier (the latter was an haute-contre himself).

'Stances du Cid' presents a selection of Charpentier’s secular vocal works, including the seldom-recorded stanzas (whose text is taken from Pierre Corneille’s tragicomedy 'Le Cid', which enjoyed great popularity for years after its 1637 première in Paris). The bucolic character of Charpentier’s other airs is complemented by a pair of airs de cour from an earlier master of the genre, Michael Lambert, and the expressive flavour of the music of ancien régime. France is suitably represented on this recording also by instrumental interludes taken from François Couperin’s trio sonatas 'Les Nations', deftly handled by L’Yriade.

In his booklet essay Vincent Borel supplies a colourful defence, both of the potency of the air de cour and of its quintessential voice, the haute-contre.

This is a desirable disc - one in which Auvity’s distinctive haute-contre amply conveys the emotions of these varied and beautiful airs. L’Yriade are excellent in their accompaniment…the sound is beautifully captured and well balanced…Glossa should be applauded for this release