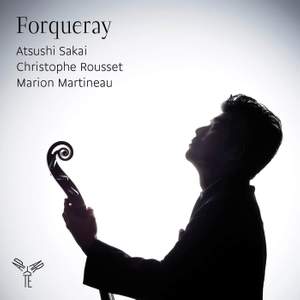 Sakai’s performances are distinguished by the freshness and sincerity of his interpretations. He is an eloquent exponent, never pretentious or superficial, never afraid to play slowly. He produces... — Gramophone Magazine, May 2016 More…

Each appearance of Atsushi Sakai and Christophe Rousset leaves an unforgettable memory with those who have had the good fortune to hear them commune on stage. Long-standing partners, they now join together for the first time on disc for a composer they worship: the mysterious Antoine Forqueray. Born in 1672 in Paris, he was, with Marin Marais, one of the greatest gambists of all time. Famed for his virtuosic improvisations, he published none of his 300-odd pieces and died in 1745 in Mantes where he had moved in 1731, after having suffered serious financial setbacks, especially in the course of Law’s bankruptcy. Aside from a few handwritten pieces copied in the collections of other composers, Forqueray’s pieces have been lost.

The release of the 'Pièces de viole', to which the present recording is devoted, is thus the sole important testimony to his oeuvre.

Atsushi Sakai studied cello with Christophe Coin and is often to be found as a continuo player in ensembles such as Les Talens Lyriques and Le Concert d'Astrée, with which he has performed in a large number of concerts and recordings. He is co-founder of Sit Fast (consort of viols) and the Quatuor Cambini-Paris.

Sakai’s performances are distinguished by the freshness and sincerity of his interpretations. He is an eloquent exponent, never pretentious or superficial, never afraid to play slowly. He produces a consistently lovely tone, and his sense of Forqueraian phrasing and attention to detail are impressive. He is…partnered by Christophe Rousset, whose stylish yet transparent and evocative realisations are peerless, and Marion Martineau, who perfectly blends her instrument’s tone-colour to Sakai’s