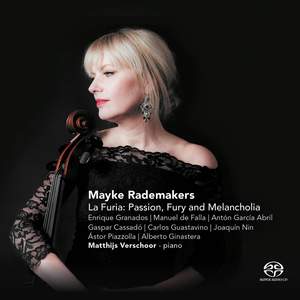 The second release of versatile Dutch cellist Mayke Rademakers on Challenge Classics is a thoughtfully-planned and exciting selection of Spanish and Latin American pieces which take inspiration from folk music - in a nutshell, flamenco and tango.

Among the Spanish pieces Rademakers and pianist Matthijs Verschoor play are the 'Suite Populare Espanola' by Falla and Granados's 'Andaluza', while the South American ones include Piazzolla's 'Le Grand Tango' and music by Ginastera and Guastavino. At the centre of the programme is the Suite for solo cello by Gaspar Cassadó.

The cellist says: "Spanish music takes folk music as its starting point. 'La Furia' is based on that idea. This music is about the heat, the poverty, about lifestyle and passion. La furia literally means anger or aggression. But in Latin, the word has very positive connotations. It means doing what your instincts tell you, acting with passion, giving it your all."

Mayke Rademakers first studied with the Hungarian cellist György Schiffer, and later with André Navarra, William Pleeth and Janos Starker. Rademakers has appeared as soloist in numerous recitals, chamber music concerts, broadcasts and solo concerts both in Europe and the USA (Aspen Festival). Her previous recordings - with works by composers such as Brahms, Liszt, Rachmaninov, Shostakovich, and Bridge - were acclaimed by the international press. Her most recent release, in 2015, was her first for Challenge and featured Bach's six Cello Suites coupled with pieces by contemporary composers & improvisations (CC72682, 3-CD set).