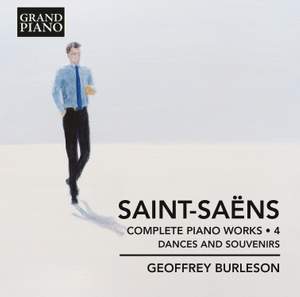 Although he is best remembered for his orchestral and instrumental music, Saint-Saëns was also responsible for spearheading the revival of the French Baroque, especially the music of Lully and Rameau, as well as being perfectly placed to absorb the latest instrumental dance music. His five ‘character waltzes’ include the ethereal and ravishingly textured Valse mignonne, the stylistically forward-looking Valse nonchalante and the virtuosic Valse gaie, the composer’s final waltz for solo piano, while the three minor key Mazurkas are strongly characterised and filled with ingenious musical contrasts. Last but not least, the three ‘souvenirs’ are delightful evocations of particular corners of the world that inspired Saint-Saëns.