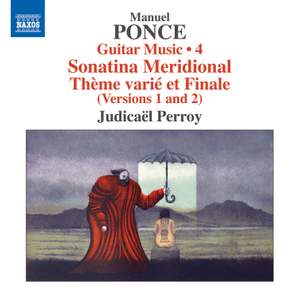 Ponce, M: Variations on a theme by Cabezón

Considered by many to be the founding father of 20th-century Mexican music, Manuel Ponce dedicated himself to composing for guitar after meeting Andrés Segovia in 1923. The evocative and warmly lyrical Sonatina Meridional is his response to Segovia’s request for a work “of a purely Spanish character”. The two versions of Thème varié et

Finale with their inspired harmonic progressions are recorded together here for the first time, as is one of Ponce’s most expressive pieces, the Andante from a manuscript lost during the Spanish Civil War. The Variations on a Theme of Cabezón was his final work for guitar.