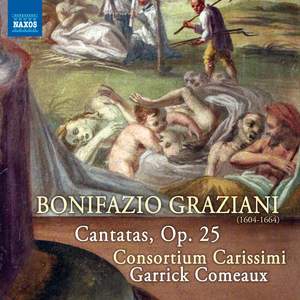 Bonifazio Graziani, maestro di cappella at the Jesuit Church in Rome, is now emerging as one of the most eminent figures of the mid-seventeenth century Roman baroque period, the so-called Scuola romana. Like his great contemporary, Giacomo Carissimi, he favoured the genre of the solo cantata for one, two, three and four voices. The liturgical cantatas, or motets, from Musiche sagre e morali, are notable for their tremendously varied subject matter, ranging from Lenten penitential and Christmas themes to philosophical discourse on the meaning of life, as in Mal’accorto pensier (On the vanity of the world). Volume 1 of polyphonic works by Graziani can be heard on Naxos 8573256.