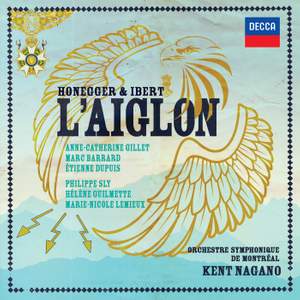 Conducted with care and palpable affection by Kent Nagano, [this release] boasts a fine, mostly francophone ensemble cast, with not a weak link anywhere. At its centre…is Anne-Catherine Gillet’s... — Gramophone Magazine, April 2016 More…

This first recording of the complete, uncut operetta L’Aiglon (the recording was made at the time of the North American premiere in March 2015) is given with an entirely French or French-speaking cast. L’Aiglon is a charming operetta in five acts with music composed by Arthur Honegger and Jacques Ibert. The libretto by Henri Cain was based on Edmond Rostand's 1900 play, L’Aiglon (“The Eaglet”), about the life of Napoleon II. It was first performed at the Opéra de Monte-Carlo on 11 March 1937. This release – the first in a new multi-album contract – revives the historic partnership between Decca and the Montreal Symphony with the orchestra’s new principal conductor Kent Nagano and in its new home, the Maison symphonique de Montréal.

Conducted with care and palpable affection by Kent Nagano, [this release] boasts a fine, mostly francophone ensemble cast, with not a weak link anywhere. At its centre…is Anne-Catherine Gillet’s Duke, bright in tone and wonderfully subtle…Marc Barrard is the touchingly funny Flambeau, while Etienne Dupuis makes Metternich all the more sinister by singing his music so beautifully. The orchestral sound is gorgeous, as is the recording itself