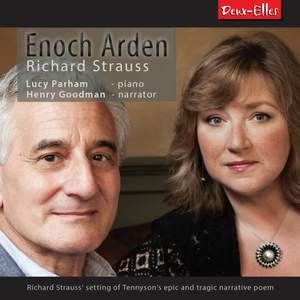 II. So these were wed. Langsam

VIII. Allegro agitato...“Now, when the dead man come to life”

IX. Langsam...“Woman, disturb me not at the last”

Enoch Arden is a narrative poem published in 1864 by Alfred Lord Tennyson. Richard Strauss admired and was highly influenced by this poem in its German translation and subsequently wrote a solo piano part to accompany the poem and unite spoken word with music, in the form of a melodrama. Set in the Scottish coast, the poem tells of a young fisherman and an orphaned Enoch Arden, his chidhood sweetheart Annie Lee and Enoch’s best friend Philip Ray, the Miller’s son. Composed in two halves, Strauss weaves the music around the narrative and uses three individual “leitmotifs” to portray the three characters in this dramatic and moving story. Composed in 1897, Richard Strauss himself and actor Ernst von Possart toured widely with this version of Enoch Arden to great recognition.