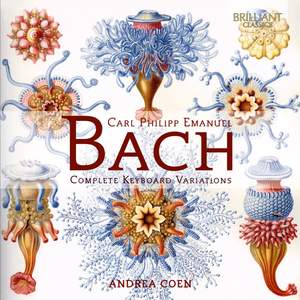 Colin a peine a seize ans

Carl Philipp Emanuel was the most famous and successful son of the great Johann Sebastian. He was a protagonist of the Empfindsame Stil, intended to express true and natural feelings, featuring sudden contrasts of mood en emotions. This is especially applicable to the sets of variations for keyboard, in which the composer lets his imagination free reign, varying from purely ornamental variations of an instrumental/technical nature, to the complete change of character.

The basis of the variation sets are arias or ariosos, a minuet or a famous melody of the time, like “Les folies d’Espagne”.

Played on a Kerstin Schwarz fortepiano (after Silbermann 1749) by Andrea Coen, one of the most prominent keyboard players of Italy, who successfully recorded for Brilliant Classics works by Telemann, Cimarosa and Giustini, resulting in 5‐star reviews in the international press.