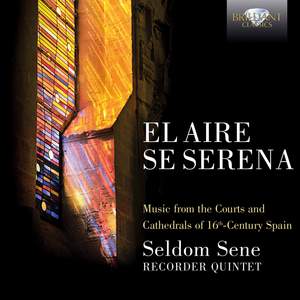 This beautifully conceived CD presents music from the Courts and Cathedrals of 16th century Spain. The composers include Cabezon, Geurrero, Penalosa, Vasquez, Morales, Victoria, Milano, Lobo, Torre and Caroso. One of the main practices in 16‐th century Spain was the transcription or arrangements of vocal music from the Franco‐Flemish School. Masses, motets and madrigals by Gomberg, Josquin and others were transcribed for instrumental ensembles. · Seldom Sene is a recorder ensemble from the Netherlands. The ensemble’s aim is to translate the typical phrasing, blending, flexibility and expression of a vocal ensemble into an instrumental performance, and recreate the sense of Serenity and Brilliance as is described in the CD’s title. Seldom Sene already recorded a successful CD for Brilliant Classics, Taracea BC94871, Gramophone wrote: “commitment, technical versatility, unanimity of ensemble and near‐immaculate tuning on display”. Dutch newspaper Early Music Review wrote: “Seldom Sene perceptively exploited a range of contrasting textures, and was the only ensemble of the day whose memorisation of the dots enabled unbridled spontaneity.”