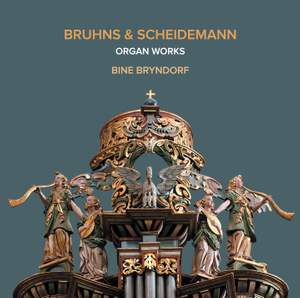 This recording features a collection of magnificent pieces from one of the golden ages of organ music, 'the North German School' of the seventeenth century, which also had ramifications in Scandinavia. Five early pieces by Heinrich Scheidemann and six by his successor Nicolaus Bruhns, recorded by Professor Bine Bryndorf, offer imaginatively virtuosic playing and fervent organ chorales that make use of the whole technical and expressive range of the unique St Raphaëlis Baroque organ in Roskilde Cathedral.

Bine Bryndorf was born and grew up in Elsinore. At the age of 18, she went to Vienna and took her complete training there. Later came the soloist class and further studies in Saarbrucken and Boston. Her most important teachers were Kristian Olesen (organ), Bjørn Hjelmborg (theory), Michael Radulescu and Daniel Roth (organ), William Porter (improvisation) as well as Gordon Murray (harpsichord).

Bine Bryndorf has played concerts in most European countries, in Japan and the USA and is in great demand as a jury member in international organ competitions and as a teacher at masterclasses. Chamber music has always been an important element in her activities.