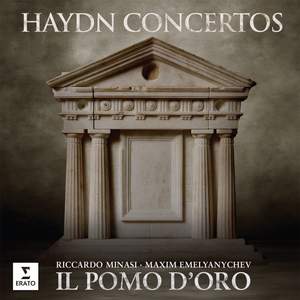 In performances of such commitment and flair, nothing is routine. — BBC Music Magazine, July 2016 More…

Conducted by Minasi, Il Pomo d’Oro appears on two recent Erato releases: Handel’s sparkling opera Partenope and Giovincello, the collection of Baroque and Classical cello concertos with Edgar Moreau as soloist. Though Minasi was born in Rome, Il Pomo d’Oro has a particularly strong association with Venice, so it was appropriate that conductor and orchestra accompanied countertenor Max-Emmanuel Cencic in his recital Venezia – Opera arias of the Serenissima, released in early 2013. (Minasi also conducted Joyce DiDonato’s album Stella de Napoli, though there he was in charge of the Orchestre de l’Opéra de Lyon.)

Haydn’s Cello Concerto in C major featured on Giovincello alongside works by other composers, but here the album is entirely devoted to works by the groundbreaking, prolific, long-lived and influential Austrian composer. He wrote numerous concertos for solo instruments and combinations of instruments; perhaps most famous of all is his trumpet concerto in E flat, but this collection focuses on concertos he wrote for violin (played here by Minasi), keyboard (Emelyanychev, here playing harpischord), and horn, (the Austrian horn-player Johannes Hinterholzer). The concertos are complemented by his Symphony No 83 (known as “The Hen”, because of the ‘clucking’ figures on the strings in its second movement) and his Keyboard Fantasia Hob.XVII:4.

When Minasi and Il Pomo d’Oro appeared at London’s Wigmore Hall in 2014, the Guardian wrote: “Il Pomo d’Oro is a wonderful ensemble, and Minasi an outstanding musician … Minasi gave us concertos …, dancing as he played, communicating his joy in music-making to us and to his ensemble, and bringing the house down with his virtuosity.”

In France, Emmanuelle Giuliani of La Croix had to following to say about Maxim Emelyanychev: “He can do anything with his ten fingers … Rapid, rippling figurations and thrumming chords; from a barely-sketched caress to undulating, legato lines. Beyond his peerless technique one is struck by the lively, passionate spirit of a man of the theatre.”

In performances of such commitment and flair, nothing is routine.

Emelyanychev, using what sounds like a single-manual harpsichord, gives spruce, deftly timed accounts of both his solo concertos…Hinterholzer is a refined, mellow-toned soloist in the Horn Concerto, spinning a beautiful sustained line in the Adagio…the spirited period band also give an enjoyable account of arguably the most popular, certainly the most eccentric, of Haydn's 'Paris' Symphonies