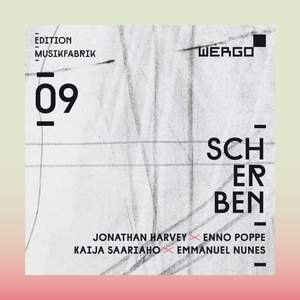 Love, light and breaking points – these are the topics of the new release of Edition Musikfabrik containing further important premieres from its WDR concert series. In his composition 'Chessed I', Emmanuel Nunes explores the issue of love in the sense of God's loving devotion towards mankind. Taking up cabbalistic thought, he transforms it into a meditation on the light. Light is also the central theme of 'Notes on Light' by Kaija Saariaho: her cello concerto gets down to the 'heart of light' where silence prevails. A different kind of love is the theme of Jonathan Harvey's 'Sringara Chaconne': According to Hindu belief, Sringara, or love, is the beginning of all art. Enno Poppe, on the other hand, focuses on the power of the prism: He presents his music in various refractions, in shards [Ger. 'Scherben']. For he knows that once the breaking points have been recognised, the connections are revealed automatically. This time, the demanding artwork of the CD series is created with pictures by the painter Gerhard Richter, commenting on the thematic concentration of the programmes in an artistic manner. Richter, one of the most important living German artists, has been a member of the board of trustees of the Ensemble Musikfabrik since 2009.