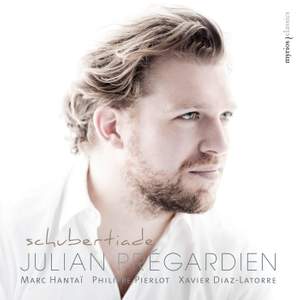 a captivating and most artfully programmed recital in which Pregardien’s tenor is lightly suspended over a guitar’s gentle strumming — BBC Music Magazine, April 2016, 4 out of 5 stars More…

In their 'Schubertiade', Julian Prégardien and his instrumental friends recreate the special artistic mood one could have felt in Schubert’s day in a Viennese salon. To evoke that atmosphere, they have created a new collage of musical and literary fragments associated with the composer, featuring the unusual combination of flute, baryton and guitar.

Three experienced early music specialists with the best credentials – Philippe Pierlot, Marc Hantaï and Xavier Diaz-Latorre, known from the Ricercar Consort, Le Concert des Nations and Les Arts Florissants – gather as a fine instrumental ensemble around one of the young singers most in demand on the current musical scene. With them, he presents his new SACD album “Schubertiade” on the Cologne-based Myrios classics label. Well-known Schubert songs such as 'Heidenröslein', the 'Harpist’s Song' and 'Schwanengesang' alternate here with dances and short instrumental pieces.

what a beautiful piece of chamber music that is, the way they performed that; they’ve matched their sounds absolutely magically and they transport us from a completely different place from where we expect to be when we put our disc of Schubert Lieder into the player, so all credit to them for making something so persuasive … it is very, very stylish and sensitive and intelligent music making, and it is very compelling.