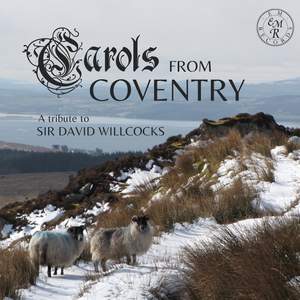 Carols from Coventry - A Tribute to Sir David Willcocks

Scheidt: A Child is born in Bethlehem

Tomorrow Shall Be My Dancing Day (Arr. D. Willcocks for Choir & Organ)

Kirkpatrick: Away in a Manger (Arr. D. Willcocks for Choir & Organ)

Unto Us Is Born a Son (Arr. D. Willcocks for Choir & Organ)

Sir David Willcocks, who died in September 2015 at the age of 95, is probably best known as Director of Music at King’s College Cambridge from 1957 to 1974; he was subsequently Director of the Royal College of Music, and was conductor for many years of The Bach Choir. Since the 1960s his iconic arrangements of favourite Christmas carols have become an essential part of the festive season, through the annual broadcast of the Festival of Nine Lessons and Carols from King’s, through recordings, and through the books of Carols for Choirs which he edited and to which he contributed many carol arrangements - now known and loved by choirs around the world. In this memorial tribute to an inspirational and well-loved musician, Saint Michael’s Singers of Coventry Cathedral perform a selection of the best of David Willcocks’ carol arrangements together with some new compositions and arrangements from Carols for Choirs 5. Saint Michael’s Singers, an auditioned choir of some 90 voices, was formed in 1963 shortly after the consecration of the new Coventry Cathedral, and performs in concerts in Coventry and around the Midlands, as well as broadcasts and recordings.