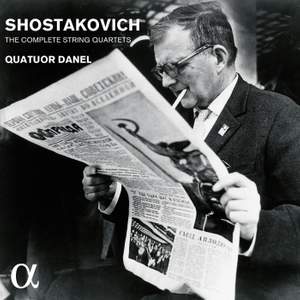 Shostakovich: String Quartet No. 5 in B flat major, Op. 92

Well known for the intensity and profundity of its interpretations, the Quatuor Danel has made a name for itself on the international classical scene (winning such awards as the Diapason d’Or, Choc du Monde de la Musique, and CD of the Month in BBC Music Magazine) in the great cycles that form the basis of the quartet literature, from Haydn, Beethoven and Schubert to Weinberg. Since Russian composers occupy a key position in the Danels’ repertory, it was logical for them to champion the quartets of Shostakovich by recording them complete in 2005. Today Alpha Classics reissues this boxed set, which is among the reference recordings of the composer’s works.