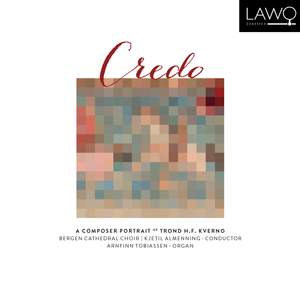 The new CD from Bergen Cathedral Choir and organist Arnfinn Tobiassen is an homage to Norwegian contemporary composer Trond H.F. Kverno. The listener is introduced to both his choral work, as well as his works inspired by medieval ballads and Norwegian folklore.

Trond H.F. Kverno is, and always has been, a composer for voice. His prolific output includes innumerable hymns, songs, masses, choral and congregational liturgical settings, motets in a variety of formats, and large-scale choral works. It is impossible to talk about Kverno's choral music without specific mention of his harmonisation. While his melodies are unique, his harmonisation is no less so. The close link between tune and harmony in his pieces is almost unmatched in the wider European context. His style ranges from pieces of Renaissance simplicity, via Bach-like chorales and monumental Romantic works to modern hymn tunes with daring harmonies – but never at the expense of a highly singable tune.

Kverno has a deep and lasting relationship to Norwegian religious folk tunes. He claims that his entire output has been devoted to the task of composing around the melodies of the Norwegian mediaeval visionary poem Draumkvedet (The Dream Ballad). Whilst this rather sweeping statement may be taken with a slight pinch of salt, it highlights how Norwegian folk music has been a constant source of inspiration for Kverno as a composer for the human voice. Throughout his works we sense an underlying connection to this cultural heritage, although he rarely simply quotes folk tunes in his compositions. Rather, he has absorbed the folk music of his native Norway into the fibre of his being, incorporating its essence into his distinctly personal and original style.