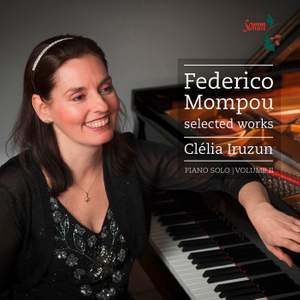 A follow-up to the successful and very well received first volume of piano music by Federico Mompou [SOMM0121], Volume 2 continues with another thirty tracks of hauntingly beautiful and memorable music by this unique Spanish composer and pianist, who died in 1987 aged 94. A recluse who rarely appeared in public, Mompou wrote music which since its first appearance, over 100 years ago, has been widely appreciated for its wonderful fusion of colour, mood and intimate characterisation. The music in this collection is wide-ranging and admirably supports the sense of atmosphere which so distinguished the first volume. With her combination of colourful Brazilian spirit and musicianship, London-based pianist Clélia Iruzun is one of the most exciting musicians to emerge onto the international scene in recent years. Clélia has won major prizes in her native Brazil and in international competitions such as the Santander and Zaragoza in Spain. Her career has taken her in most countries in Europe, the Americas and Asia, as well as the major London venues. She has also appeared several times on radio and television in several countries, including broadcasts for BBC Radio 3.

Like Erik Satie, the Catalonian Mompou (d 1987) was a quirky miniaturist, veering between the deliberately simplistic and something closer to late Debussy…Iruzun plays all with an aptly gentle touch