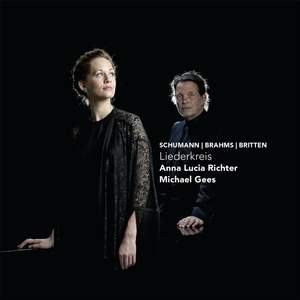 The album 'Liederkreis' unusually features improvisation in a classic genre by a singer, young soprano Anna Lucia Richter, and a pianist, Michael Gees, with Schumann's famous song-cycle interleaved with songs by Brahms and Britten.

One of the best-known of all 19th century song-cycles, Liederkreis op 39 by Robert Schumann, is heard here in a fresh and intriguing context. Its 12 songs setting poems from Joseph Eichendorff's collection 'Intermezzo' are combined not only with folksong arrangements by Benjamin Britten and others by Johannes Brahms but also with improvisations on Eichendorff's poetry. The result is a new "song circle" - a Liederkreis. Every one of the 27 songs in this cycle is related to the others in atmosphere, topic and musical identity.

Anna Lucia Richter has enjoyed a fast-rising reputation as one of her generation's leading sopranos, topping several major prizes by winning the International Robert Schumann Contest in Zwickau in 2012, and performing in as a soloist under conductors such as Markus Stenz, Paavo and Kristjan Järvi, Marin Alsop, Iván Fischer and Christoph Altstaedt. In opera she's sung many roles with the Deutsche Oper am Rhein and elsewhere, and is becoming particularly known as a recitalist - among her accompanists have been Moritz Eggert, Michael Gees, Hartmut Höll, Igor Levit, Nicholas Rimmer and Gerold Huber. At his festival in Vicenza she performs regularly with András Schiff.

Michael Gees has appeared on Challenge Classics both as soloist - including improvised Schumann and Satie - and accompanying the singers Christoph Prégardien, Julian Prégardien and Julia Kleiter.

Anna Lucia Richter's beguiling, light soprano floats limpidly through the air, a thing of evanescent beauty. Gees accompanies her with hypersensitivity, rhythms and harmonies blending in an over-pedalled soft focus