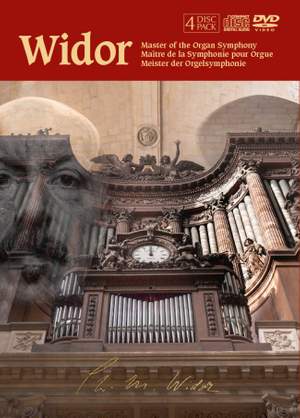 Widor: Master of the Organ Symphony

a very generous production...it's the performances on the second DVD by Brooks and Roth that make this package so attractive, however – to witness the organs of St-Ouen, Rouen, Ste-Croix, Orléans... — BBC Music Magazine, April 2016 More…

Charles-Marie Widor (1844-1937), the most famous composer of organ music since Bach, wrote ten revolutionary organ symphonies that established the organ as a rival to the orchestra, pioneered the use of symphonic forms for the instrument, and sublimated influences as diverse as Bach’s fugues, Wagner’s music dramas and medieval plainchant into an original musical language. On top of this, his Toccata is probably the best-loved piece of organ music ever written.

This boxed set provides a complete portrait of this great composer and includes a three-part documentary as well as performances on CD and DVD of his fifth and sixth organ symphonies performed by Gerard Brooks, plus other movements performed by Daniel Roth, all on the Cavaillé-Coll organs of Saint-Sulpice, Orléans Cathedral and Saint-Ouen in Rouen.

a very generous production...it's the performances on the second DVD by Brooks and Roth that make this package so attractive, however – to witness the organs of St-Ouen, Rouen, Ste-Croix, Orléans and St-Sulpice, Paris put through their paces with such fine filming and in majestic 5.1 surround sound, is a treat.

this is a lavish package indeed, and worthy of its subject...committed Widorians will need no urging to acquire this intelligently compiled, generously assembled paean to a composer who claimed to be 'born in an organ pipe'.

[Gerard Brooks] gives dramatic (though impeccable) accounts of the Fifth Symphony (in Saint-Ouen, Rouen) and the Sixth (in Orléans Cathedral)…[Roth teases] coherent and satisfying playing despite the elderly and vulnerable condition of the organ…this first-rate production will probably never be bettered.

It is difficult to find anything less than wonderful in the whole production, with its splendid organ playing, beautiful cinematography of the several great organs used throughout, and scholarly but always appealing commentary.