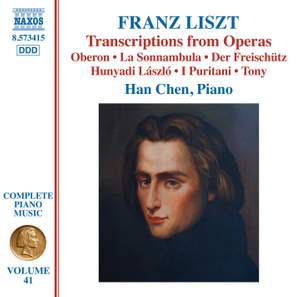 Despite his youth and relative inexperience, [Chen] fully merits his place in the series as a mature Liszt player par excellence and an artist to be reckoned with…[his] varied touch and tone... — Gramophone Magazine, March 2016 More…

Our ongoing series of Franz Liszt’s complete piano music has received wide critical acclaim for its consistent high standards, including awards such as the German Record Critics Prize (Vol. 21, 8557366). The previous album in the series, Volume 40 (8573235), was released in July 2015 and covered Liszt’s transcriptions of operas by Meyerbeer. It was given four stars by BBC Music Magazine who considered it as making “a good case for Liszt’s honouring of the operatic originals”. Further operatic transcriptions by Liszt have included those of Donizetti (Vol. 27, 8570137) reviewed as a “fine, often outstanding release” by ClassicsToday. com.

Despite his youth and relative inexperience, [Chen] fully merits his place in the series as a mature Liszt player par excellence and an artist to be reckoned with…[his] varied touch and tone makes it a journey one is eager to take without a break, though not without making you wonder afresh how on earth Liszt found the time to simply notate the music, never mind actually composing it

Liszt’s operatic transcriptions and paraphrases are musical succulence itself, and here…are another seven, all romantic, and stylishly dispatched by [Han Chen]…best, perhaps, is the opener, the overture to Weber’s Oberon, a superbly felicitous transcription of a perfect piece…[but] the Fantasie on Themes from Weber’s Der Freischütz is magnificent