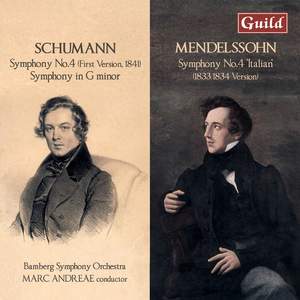 Here is a CD coupling brand-new recordings of very rarely-heard versions of music by Schumann and Mendelssohn, played by the noble Bamberg Symphony Orchestra under the widely-admired conductor Marc Andreae.

This unique disc has the original 1841 version of Schumann’s Symphony in D minor – often termed ‘No.4’ following its publication in the composer’s 1851 revised version – and the composer’s very first symphony, known as the ‘Zwickau’ (where it was composed), but one he never revised or published in his lifetime.

Maestro Andreae and the Bamberger Symphoniker additionally perform the original version of Mendelssohn’s ‘Italian’ Symphony, making a CD that is utterly unique in world discographies.

This outstandingly well played and recorded release is an absolute ‘must’ for the Romantic music-lover – making a beautiful album of considerable musical value.