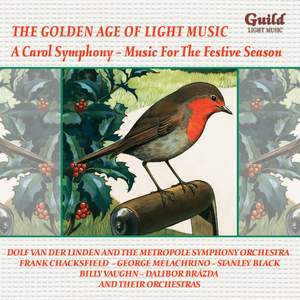 GALM 133: A Carol Symphony - Music for the festive season

Handel: Joy to the World

No. 2, Lied. Vaterland, in deinen Gauen

Guild’s first two collections of music for the Festive Season have proved surprisingly popular and there have been numerous requests for more. Although some of the carols featured here are on the previous collections, none of the recordings are.

The highlight is Victor Hely-Hutchinson’s 'Carol Symphony', a 1927 work which weaves 'Adeste Fideles', 'God Rest Ye Merry, Gentlemen', 'The Coventry Carol' and 'Here We Come a Wassailing' into a charming musical celebration of Christmas.

Nine of the tracks come from one of the finest ever Christmas albums, 'Music for a Merry Christmas', recorded by Frank Chacksfield in 1959, and never before available on CD. The three other tracks from this album may be found on Guild GLCD5222.

Dalibor Brázda debuts on Guild with a superb version of Les Patineurs and the collection is completed with recordings by Billy Vaughn and Stanley Black.