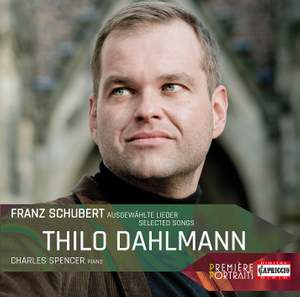 CD-Edition Capriccio's “Première Portraits” supports young and talented artists by inviting them to release their première debut CD to a worldwide audience.

Bass baritone Thilo Dahlmann won the first prize at the North Rhine-Westphalia State Competition and was a member of the International Opera Studio of the Zurich Opera House. He has been a guest performer at the German Opera of the Rhine in Düsseldorf, Wuppertal Bühnen, Koblenz Theatre and St. Gallen Theatre, and has sung important bass baritone roles in Germany and abroad under conductors such as Helmuth Rilling, Franz-Welser-Moest, Philippe Jordan, Helmut Müller Brühl, Andreas and Christoph Spering, Masaaki Suzuki and Ralf Otto.