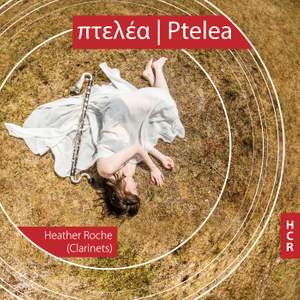 Each of the pieces on πτελέα | Ptelea was written in the spirit of intense collaboration: six pieces by six composers from different parts of the globe - the United States, Japan, the UK, Norway and Chile - each composer engaged in a deep relationship with the clarinet and its performer, each piece illuminating the unique musical language of its composer.

Including soundscapes of softly emerging dyads (Bauck), elusive sounds that sit on the border of inaudibility (Morishita) and pre-recorded human voices that emerge from inside the clarinet's bell (Einbond), all these composers have made careful and intriguing selections of materials – there are no ‘everything and the kitchen sink’ here. Rather, this collection is concerned with aspects of resistance or limitation and the exploration of margins and boundary zones.

Roche authors one of the most widely read new music blogs on the internet. In 2014 it had nearly 40,000 hits from around the world [www.heatherroche.net].