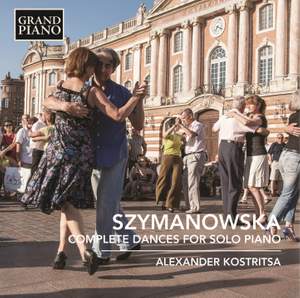 No. 1. Polonaise in C Major

No. 2. Polonaise in E Minor

No. 3. Polonaise in A Major

No. 4. Polonaise in F Minor

No. 9. Anglaise in E-Flat Major

No. 1 in A Minor: Allegretto

No. 2 in G Minor: Quasi allegro

No. 3 in E-Flat Major: Moderato

No. 4 in G Minor: Vivace agitato

Displaying exceptional musical precocity, the young pianist Maria Szymanowska proved a sensation in Warsaw’s salons, before moving to Paris where her fame spread. Greatly admired by her contemporaries, who included Beethoven, Cherubini, Field and Tomášek, she later also cast a spell over the elderly Goethe during one of her many long European tours. Before her early death, from cholera, she was employed by the Russian imperial court as First Pianist to the empress. Written for the aristocratic salons of the day, Szymanowska’s collections of dances are, for the most part, pleasing and light, yet always inventive. These beautifully written miniatures also include more challenging pieces such as the Polonaise No. 4 and the Mazurka No. 17 whose darker moments foreshadow the early German Romantics.