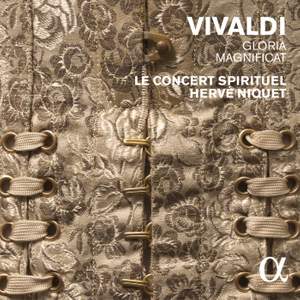 I. Gloria in excelsis Deo

Since 1987, the year he founded Le Concert Spirituel, Hervé Niquet has been a major figure in musical life, but he is also an actor in a class of his own. Major because it is thanks to his love of French music, the grands motets, large forms, and works both known and less known, that we have discovered or rediscovered treasures by Campra, Boismortier, Charpentier, Lully, Handel, Striggio, Offenbach, Grétry... Major because he is respected and loved by a great number of singers and stage directors with whom he has collaborated... And in a class of his own because he has an uncommon (or even unique, in the current musical landscape!) capacity for sharing his music directly with the audience.

Alpha is delighted to welcome this great, ‘total’ artist to begin a long-term collaboration and release the fruit of his latest research, his wishes, his discoveries and his follies. In addition to the Don Quichotte concocted with his accomplices Shirley & Dino, the festivities begin in Venice, with Vivaldi’ s deservedly famous Gloria and Magnificat, but in a version that we are not accustomed to hearing: ‘We have lots of things to discover in these works that we thought we knew,’ says an enthusiastic Hervé Niquet. ‘We propose a version of this «sausage» that is never heard. It’s the original version, the one that Vivaldi had written for the Ospedale in Venice.’

The Ospedale della Pietà is the orphanage where Vivaldi was hired in 1703 as a violin teacher then later, maestro de’ concerti. Being a girls’ orphanage, the original version of the Gloria was written for two women’s choirs and two small orchestras, forces that could take their place in the organ loft of the establishment’s church. ‘Afterwards, to make some money, he created a version for four mixed voices,’ relates Hervé Niquet. It is this version, with tenors and basses, that is well known. In the original version, ‘with the tenor lines sung by the sopranos, the melodic line is completely different. We don’t recognize it. And the solos sung in chapel by the six altos together, sounds completely different. In this version, there is fantastic work on the women’s voices. We have been performing this on tour for four years, and there is no habit, no routine. Every reprise, every «refresher» is absolutely fascinating. A nice feeling, nice sentiments, this is jubilant music. Vivaldi is, after all, a very good composer...’