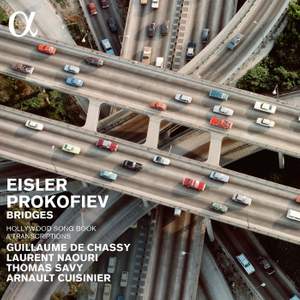 Guillaume de Chassy, Arnault Cuisinier and Thomas Savy have long made up a trio exploring original paths between jazz and classical. Laurent Naouri, the well known baritone so impressive in numerous, famous operatic roles, is a passionate aficionado of jazz in general and of Broadway songs in particular. ‘In a parallel life,’ says Guillaume de Chassy about him, ‘he turns out to be a fantastic crooner.’

This album was born from their meeting. Naouri sings Hanns Eisler’s marvellous Hollywood Songbook, composed in 1943 on poems by his companion in exile in Los Angeles, Bertolt Brecht. The trio accompanies the singer and improvises bridges between the songs. In complement, De Chassy dares Prokofiev: ‘For a long time I’ve wanted to transcribe for voice themes by Prokofiev originally written for piano or violin, but of which the evidence makes them naturally vocal.’ He adapted texts by Russian poets (Tsvetaeva, Chulkov, Lermontov, Pushkin and Esenin) to ex-cerpts from the Violin Concerto No.1 (1917), Piano Concerto No.2 (1923) and the Piano Sonata No.6 (1939). ‘So we reversed the usual process, which consists of adapting the music to the text. ‘I don’t know if Prokofiev liked jazz, but it so happens that the harmonies colouring his themes are very inspiring vehicles for improvisation. So I proceeded as on Cole Porter songs: a theme, followed by an improvisation on the harmonic sequence, followed by a final theme.’